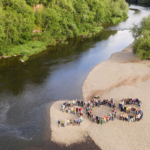 The River Wye is one of the most protected rivers in Europe, treasured by the inhabitants and visitors to the counties of Powys, Herefordshire, Monmouthshire and Gloucestershire through which it flows.

As the rapid deterioration of the River Wye became apparent, I volunteered to join FOUW (Friends of the Upper Wye) as a Citizen Scientist and to test the river on a regular basis at the same place in my village. The photo above was taken this Summer at the Warren in Hay-on-Wye with all the Citizen Scientists involved in this project to raise awareness for the impending death of the river such is the severity of the situation.

The latest report on the River Wye is deeply depressing reading. The major source killing the river is the increased level of phosphates from intensively farmed chicken units and sewage.
It has been estimated that 90% – 97% of the river’s Water Crowfoot beds have been lost due to the increased phosphate levels. The importance of Water Crowfoot in the Wye has been likened to that of mangroves in a tropical sea. The beds anchored an entire eco-system, home to insects and providing cover, food and habitat for fish.

During hot dry spells in the Summer algae bloom forms creating large areas of totally opaque water, during the day photosynthesis occurs but at night the diatoms respire and suck the oxygen out of the water with the result that fish and plants die. These algae blooms can produce potent toxins making the river unsafe for swimming and other recreational activities.

To highlight the phosphate problems plaguing the river, Angela Jones, known as the Wild Woman of the Wye, set off at the end of June, swimming down the Wye towing a large model of an egg box. 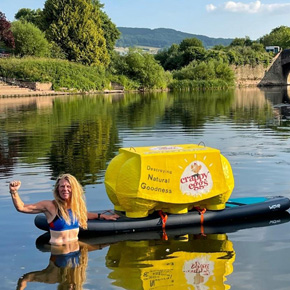 In Hay on Wye, to mark the Feast of the Assumption of The Virign Mary on Monday August 15, Father Richard Williams of St Mary’s Church, is planning to float the statue of Our Lady down the Wye from Hay to Hereford. The five day journey in canoes will be supported by local choirs and churches along the route, culminating in a service at Hereford Cathedral. All this to raise money to clean up our river and to raise awareness of its dire situation.

We should all listen to the words of Athene’s grandfather, A E Gilbert and author of ‘The Tale of a Wye Fisherman’:

‘And now I come to an end.  It is twenty five years since I wrote this book and for me, the sun is setting in the west and my day is nearly done. To those who come after me I say protect your river and do not quarrel. Whoever you are if you love the river, your interests are all the same. Fight the polluters and the water thieves and fight them to the death.  With such enemies there can be no compromise. You have a noble and glorious river’

In the meantime I will continue to take my water samples on the aptly named Bird Hide Pool, whilst I can still enjoy watching the occasional otter at play, small egrets, oystercatchers, yellow hammers and kingfishers.