British Dragonflies on the Increase 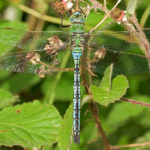 This Summer I have seen many more Dragonflies than usual, apparently numbers have soared due to warming climate and environmental factors, attracting new species.

More than 40% of resident and regular migrant Dragonflies and Damselflies have increased in number since 1970. Species that have thrived include the Black Tailed Skimmer and the stunning iridescent Emperor Dragonfly, shown in the photograph above, it is our biggest species and now found in Scotland and Ireland.

Among new arrivals are the gloriously coloured Red-Veined Darter,  Willow Emerald Dragonfly and the Southern Migrant Hawker, first recorded here in 2010. The Dainty Damselflyhas made a dramatic comeback, wiped out in the coastal floods of 1950s, it can now be seen on the Isle of Sheppey and in Kent.

Dragonflies and Damselflies are tropical insects that enjoy hot weather and are capable of long distance flights, so our warmer climate should encourage other continental species to migrate and colonise here.

It isn’t all good news, there is a decline of 11% in 5 of our resident and regular migrant species according to this recent study of 1.4 million records, undertaken by some 17,000 volunteers. This decline is harder to explain but is possibly due to loss of habitat as well as changes in weather patterns, causing both flood and drought, as well as the use of pesticides and fertilisers.