The Tale of a Wye Fisherman

The Tale of a Wye Fisherman

By H A Gilbert 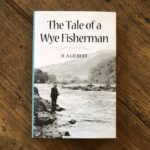 This book, just republished by Medlar Press, was written by my grandfather, Humphrey Adam Gilbert – originally printed in 1929 and then updated in 1953.
This new version is a combination of both editions including the beautiful black and white photos of people and the river from the first edition.
On my grandfather’s commemorative stone in Bishopstone Church near Hereford, it reads H.A. Gilbert – famous Cricketer, Ornithologist and Fisherman. Humphrey played for Worcestershire and was a reserve for England; along with Arthur Brook – a clock maker from Builth Wells, made the first film of the Golden Eagle; and on the Wye he caught a 49lb Wye Spring Salmon along with many more fish.

A privileged life! But he did work as a Barrister and fight in the First World War. He was passionate about his river – The River Wye – about the salmon and the people and industry that depended on it. I am deeply proud of this book and delighted it has come back into print after almost 70 years.  My grandfather wrote it without prejudice and meticulously records the various ways the ‘tuck boatmen’ netted the fish in the mouth of the estuary and higher up.  He details the enormous complexity of the history of laws and bye-laws and of organisations that came and went in their efforts to protect the river and its fishing.  He records some of the characters of the river – namely Pashley – a superb fisherman – who he named ‘The Bonaparte of the River’.
It is simply quite staggering to read the records of the number of fish caught in the river over this period.  My grandfather lists them all.  Let this be a wake-up call! A vital ‘baseline’ of memory – lest we forget that once – not so long ago – the River Wye gave us thousands of salmon each year – enough to support an industry – a river ‘worth fighting for’.
I would like to end with some quotes from my grandfather’s book:
‘And now I come to an end.  It is twenty five years since I wrote this book and for me, the sun is setting in the west and my day is nearly done.  To those who come after me I say protect your river and do not quarrel.  Whoever you are if you love the river, your interests are all the same.  Fight the polluters and the water thieves and fight them to the death.  With such enemies there can be no compromise.  You have a noble and glorious river’

And lastly …..’here I live by the grand old river in sight of the magnificent sweep of the great ridge of the Black Mountain towering over the valley far away to the south.  Here in these beloved surroundings may I spend my life, and when my call come and I have to face the Great Architect of the Universe, may I be laid in peace in Sollars Churchyard.
I shall be up of a summers night when I hear the salmon jumping in the river below.’

This Easter my sister and I were ‘flowering’ the graves of our family in Sollars churchyard and afterwards we took a walk along the River Wye below.
Suddenly the was a huge splash and my sister turned to me and asked ‘What was that?’ I replied ‘A salmon jumping’
Long may this be so – its destiny along with that of the Shad,  Lamprey, Eel, Grayling, Barbel, Chub, Roach, Gudgeon, Stickleback, Pike, Silverfish and Trout – lies in our hands.

Tales of a Wye Fisherman is available from Medlar Press